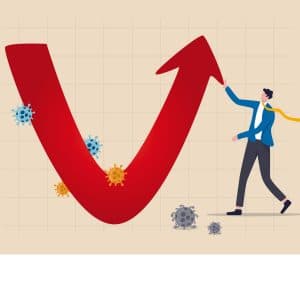 The neat V-shaped recovery vs K-Shaped

When we talked about investments during the initial phase of the pandemic we made it cleaer that the situation would not be over in 2020. Yet, some commentators are already talking about the recovery.

The neat V-shaped recovery is not going to happen in many countries as we partially lock down for a second time across Europe. Whilst some countries have an economic plan, many countries have nothing. Some scientists recommend a â€œcircuit-breakerâ€, but this should only be interpreted as an ongoing requirement leading to a series of â€œcircuit-breakersâ€ perhaps going on indefinitely.
Most recessions affect most people, but this is not a normal recession. This one has led to the destruction of some sectors and industries, but simultaneously turbo-charged other sectors and industries to the point that we believe in the concept of a K-shaped recovery.

Follow the top arc, and the people on this arc become wealthier. The bottom arc, well, you do not want to be on the bottom arc!

Circuit-breakers would further compound this.

Put another way, the recovery will be split between those who have maintained their jobs and saved money during 2020, against those who have lost jobs, taken pay cuts, or were furloughed with uncertainty or worse in the end. The suggestion from some is continue pay people for not being able to work for, again, perhaps indefinitely with no defined outcome.

Government protection schemes and splurges will have to paid for. Quite rightly it will be business, higher earners and the wealthy.
Targets for tax will be anything easy such as houses, inheritance and investments. For example, in the UK, Capital Gains tax on second homes being bought in line with income rates?

However, as of late September 2020, there is a disconnect between economic data, stock markets, and robust housing market figures.

Economic data from every western country is dire, whilst house prices went up 3.4% (Office for National Statistics house price index) to end of June 2020. Shares in various parts of the world have rebounded 10-30%

Do not kid yourself, the 3 are inextricably linked. Brexit alone could crush business confidence in Europe, whilst Covid could destroy consumer confidence. The IMLA (43 Banks and Building Societies) expect up to 5% of all borrowers to go into arrears. Historically there has never been a recession without a fall in house process in the following immediate years.
So why are house prices and shares going up?

For house prices there was a mortgage payment deferral scheme in the UK, although this soon comes to an end. The real position of the UK has been hidden by the Furlough scheme, whilst pent up demand for the â€œlostâ€ 4 months combined with stamp duty holiday to a surge in house prices in the summer. To a greater or lesser extent this is also happening in other countries, along with a push for people previously living in flats in cities to now want to re-engage with rural life.

However, unemployment rises, average household incomes fall, people struggling to repay, debt burdens for some, repossessions or forced sellers can lead to discounts, as can increased death rates and inheritance. Therefore, once demand has been satisfied there is little reason for seeing there a possibility for ongoing growth.

More people selling, with less people being able to buy, means price falls. An index of realtors and estate agents in certain areas of the USA and the UK are beginning to see house asking prices being reduced. Once price falls set in, the experience of the 1970â€™s and 1980â€™s could easily be repeated.

Deposit money utilised now could just be chalked up as a loss within two years. So, lenders increase the amount that has to be deposited. If this happens, you know what lenders are thinking!

However, there is one big difference this time, and that is unquestioning confidence in property and low interest rates. Can these two things alone sustain house prices through 2023? Or will it be the story of those on top arc of the K recovery are about to benefit again from a correction in house prices?
Shares are a slightly different story, and we will write and post an article online with regard to shares and the potential tech bubble building.

The views expressed in this article are not to be construed as personal advice. You should contact a qualified and ideally regulated adviser in order to obtain up to date personal advice with regard to your own personal circumstances. If you do not then you are acting under your own authority and deemed â€œexecution onlyâ€. The author does not except any liability for people acting without personalised advice, who base a decision on views expressed in this generic article. Where this article is dated then it is based on legislation as of the date. Legislation changes but articles are rarely updated, although sometimes a new article is written; so, please check for later articles or changes in legislation on official government websites, as this article should not be relied on in isolation.